This was one of the best and worst days for weather and riding conditions.  I woke up expecting rain and it was still dry , so i hit the road as quickly as possible after 3 bowels of cereal and a cup of tea or two .

Within 5 km i was saturated and cold and riding to keep warm,  It  was not working, the temperature was about 6 degrees, probably -3 or 4 with the wet and wind.  I stopped under a tree in the rain as there is pretty much nothing from Haast all the way to Makarora 80 km later . I put on extra layers , pretty much everything I had as far as cycling gear went, and hit the road again to try and warm up . It made a bit of a diffrrence . After about 40 km of rolling 2-3% climbing it really starts to climb up to the Haast pass , not particulary high bit good for the core temp and then an 18 km descent to Makarora .

Haast pass saddle , a welcome site bit a short stop so as not to get to cold.

At Makarora I ate and drank ,  whilst dripping on the floor and continued to get colder and colder , I decide to have a shower and dry all my clothes so i checked into the camp ground. Had a long hot shower to thaw my fingers and got completely changed into my dry evening clothes , jandles , swimming togs and a long slieve shirt and down jacket . I sat in the laundry room with all my cycling gear in the dryer for 40 mins or so .

I waited here for a while as the front was supposed to pass over . Eventually the rain eased a bit, I put all my now dry cycling gear back on and headed back to the cafe to wait out the sun . I think I spent 3-4 hours in Makarora before the sun finally came out .

A little saddle looking down to lake Hawea. By this point i was back to summer riding gear it was 30 degrees with the strongest tail wind I think I have ever experienced on a bike. 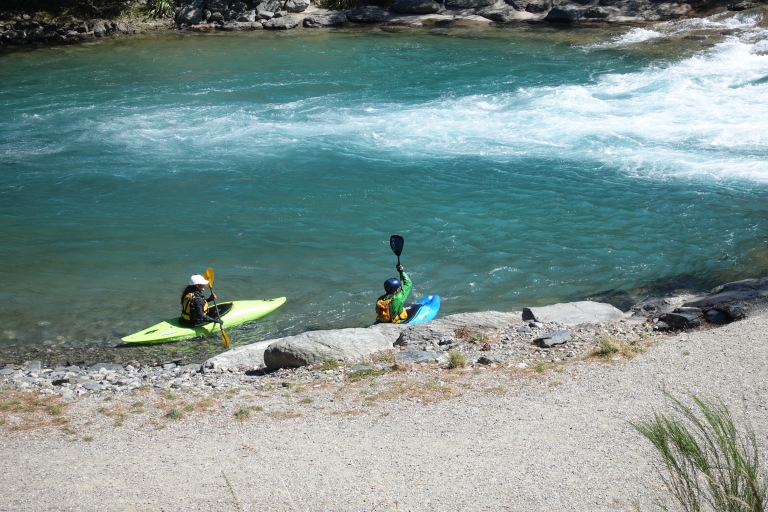 Some kayakers playing in a standing wave on the river outflow from lake Hawea .

Another beautifully groomed cycle trail from Hawea to Wanaka .

Another of our controls, Hawea track swing bridge just before Albert Town.

After arriving in wanaka and having a late lunch about 4 pm , having been riding since about 4 am , i was contemplating calling it a day , but the howling northerly was beconning to be used, to get over the Crown range quickly and then it would be all down hill to Queenstown.

A welcome site and stop at the Cardrona hotel , after taking maybe an hour longer than expected to get here.  On entering the cardrona valley I quickly regretted my decision to carry on , the wind had turned and was funnelling down the valley , fully head on , after a while I thought there was something wrong and realised my back brake was jammed on and was providing a bit of extra resistance . A quick stop to release the pads from the disk and the wind felt a tiny bit less draining .

Still riding up to the saddle on the crown range , starting to get dark .

The wind came and went and came again with the hills and turns in the road providing some reprieve . Fuelling as I went and stopping to put all my layers back on as the temperature was dropping fast with the disappearing sun and the rising altitude.

The saddle came with a little more daylight to be had so I high tailed it down the other side only to be just about blown off the mountain on the first corner and comming to a complete standstill in the wind .

Possibly one of the most horrible decents I have had to do . But the road quickly became antrack and i resorted to my lights in the dark and the track appart from being anything but flatband decending was a welcome site and preferable to the road in the dark .

I got into lake hayes estate about 10pm to stay at some friends who had saved me dinner and prepared a bed for a very welocme hot ahower and a nights sleep .

Biggest day of the trip, and definitely the most trying.